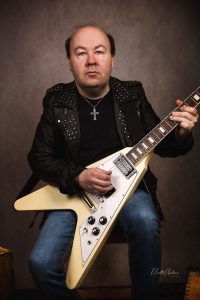 My name is Thomas Hansson and I was born here in Sweden, Dalarna in 1973. I grew up and still live in a little town on the countryside called Malung. When I was a child at the age of 6 I used to listen to my father’s Elvis records and my mother playing the piano, mostly classical stuff but also songs that were popular in the 70’s. My sister sang and was the one who introduced me to the guitar at the age of 7 but it took a while before I got really serious about it. However, in the mid 80’s a friend of mine played a cassette tape with The Michael Schenker Group’s first album on it. I was playing drums at the time but after hearing that record I was totally blown away! There and then I decided I want to become a lead guitarist. I practiced a lot in the beginning, up to 5 hours a day so skipping school was not unusual for me. Today I’m very happy I made that decision, I’m in a band playing the kind of music I like.
Our second album ”Highway to heaven” vill finally be released by AOR Heaven on Friday 28th this year. It was fun recording and i hope you will like it.