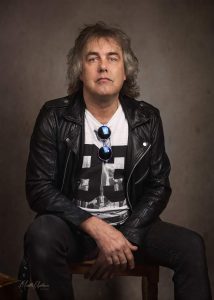 Hi, my name is Lars-Åke Nilsson but most people call me Plåtis which is my nickname. I`m the vocalist in the band Stormburst. I grove up in a nice little village called Vansbro in Dalarna, Sweden. My interest of music started when I was 16 years old and I heard the Sweet`s album, Funny Adams. It took me by storm, and in a couple of days I bought myself my first electric guitar and an Hagström AMP. Then Boston came out with their first album and I was completely blown away. In 1978, a couple friends asked me if I wanted to join their band as a bass player, I accepted and that was what later become Keen Hue. I stayed in Keen Hue for 11 years, then it was time to move on in life. My love for music was so strong so a couple of years after quitting Keen Hue, I started to sing and played bass in a cover band called Rocka Drula and after that another cover band called By Paz. Anyway, in the summer of 2014, Kent Jansson phoned me and asked if I wanted to start a band with him and Thomas Totte Hansson. The intention was to write original songs, I thought it was a great idea and a great possibility for me, so I said yes of course. I am very glad that I gave music a chance again because it gives me so much pleasure and fun. So keep on Rocking out there and believe me – I will.