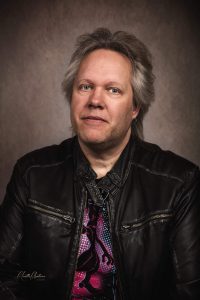 I’m Pelle, the new drummer in Stormburst. I got my first drumkit when I was ten years old, and I’ve been faithful to the drums since then. I didn’t think twice when I got the question to join the band. It’s an honour for me to play in the same band together with people that I looked up to in my early teens…I mean….Six feet under, and Keen Hue. Those were the big names in hard rock in this region in the 80:s. Well… I’m also still the drummer in my other band Eternal (of Sweden), but now since my kids have grown up, I want to spend more time behind the drums, and I love to join Stormburst, a band that makes original music. And musicwise, I think Stormburst will fit like a ”Hand in glove” for me since I’m a convinced and dedicated fan of melodic hard rock. I hope that I will live up to the standards to satisfy both You, and the guys in the band.