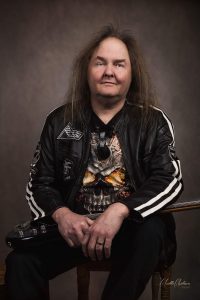 Gabba gabba hey! My name is Kent Jansson and I was born in a wonderful place in Dalarna, Dala Floda is the name of the village, which is situated on the countryside. It is not a big place, but I had a great time when I grew up there in my younger years. Music has always been around me somehow, first playing the records of Sweet, Slade, Status Quo, Deep Purple and many others.

Later on, I started to play the electric guitar. It was an awful time for my friends, girlfriends and everybody in the house. Well, I guess the neighbours weren’t so happy either. But the years passed by, I developed and I also switched to bass guitar. Therefore, I started playing in a band and we recorded a demo, I played and sang on that one. But my singing was quite bad, so I had to find a singer. I phoned Björn Lodin up and asked him if he wanted to start a band, because I had heard Björn’s band Rainfall in Rättvik and I liked the sound of his voice. Björn said yes and soon Six Feet Under was created. We made two albums.

After Six Feet under, the guys from Keen Hue phoned me up and asked if I could join them, so I did. I think it was in 1983/84 and Keen Hue does still exist, but with a completely different line up, just playing covers. Keen Hue also made two albums. Then I started the band Steam, beside Keen Hue, for the same reason I started (the current) Stormburst. I love to play songs written by the guys in the band or my own songs.

The last ten years I am now living in a small village with the beautiful name Äppelbo (Apple Nest) right beside the river. I just love life, so live it like there’s no tomorrow.

Finally, don’t forget to rock hard, play the music loud and have your own Stormburst moments………….